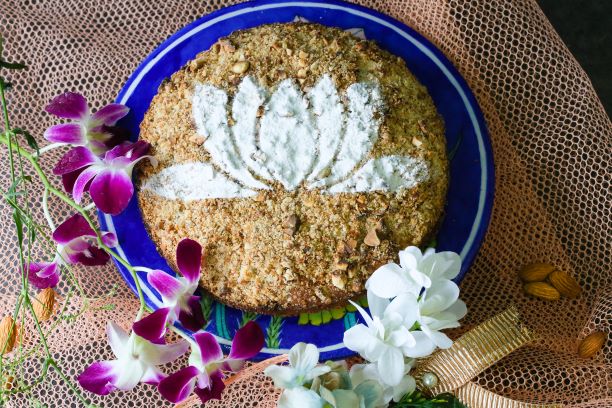 “Anuja Aunty can I come and cook with you?”  Music to my ears!  Aashna Sundesha, one of my favorite students had graduated from the school in Mumbai and moved to be a thriving freshman at Johns Hopkins University in Baltimore, Maryland. She had just reached home for Christmas break and was excited about recipes she had discovered in class.

While taking a course in Old Books, she had come across recipes from 1929, in a book called The New Cookery Recipe Book. I was thrilled that she had thought of me and saved these recipes for us to experiment with together! I loved the idea of delving into a little historical baking!

I’m not much of a baker, with the exception of bread and cookies, especially since I don’t have a sweet tooth!  So there are very few desserts and cake recipes on my blog!  But Aashna runs her own bakery business when she is in town, so I thought this was a good opportunity to learn from someone younger!

What I like about the cake is that it has only nine ingredients (we added vanilla as the tenth.)  Because it was a 1929 recipe, we didn’t use an electric hand beater but mixed the cake by hand. (The electric hand beater was apparently invented in 1908 but came into use only in the 1920s.) I suspect ingredients like butter were fresher than- I’m sure the butter was homemade with much more moisture, and the unprocessed milk was loaded with fat!

Beating the sugar with an electric beater, as I found the second time around, makes the cake much lighter. But you might find you need a tablespoon of extra milk to get a smooth batter for the cake. Watch Aashna teach me how to make the cake in the video below:

Because it is made only with brown sugar, it almost tastes like gingerbread!  I love that flavor goes from just cinnamon and almonds, giving it a mouth-watering aroma as it bakes. Try it!  It’s like eating a little bit of history!

Critical Ingredients: Vanilla is optional – I think even almond extract would work well.  You could substitute almonds with walnuts and get a great cake.  The brown sugar gives flavour and texture to the cake, and I assume it also provides acids to the baking powder to help in the rising of the cake. Cinnamon gives it aroma, but on a very desperate day you could try using ¼ teaspoon of nutmeg instead!

Tip:  The crumble on this cake is a bit dry. This may be because the butter in 1929 was fresher and had more moisture! I would add 2 tablespoons butter to the ½ cup almond topping to make it less powdery and richer.