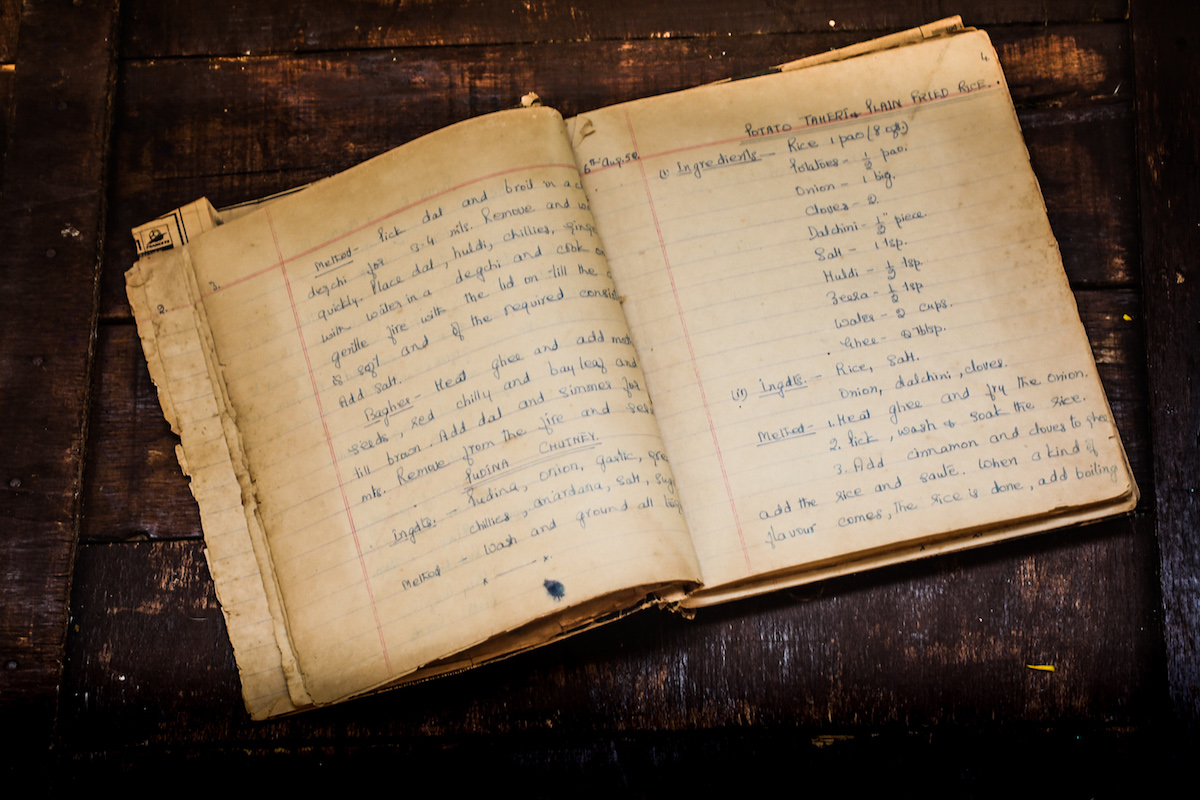 A few years ago, we tore down my parent’s old house in Delhi and moved my Mom to a temporary apartment, while her home underwent reconstruction.  When we moved her back, and unpacked her boxes, all kinds of old treasures and memories resurfaced.  One of the MOST precious finds was my mother’s college notebook of recipes from her Cookery class in her BSc Home Science major in 1952!  She was just 16 when she noted down these recipes in her clean, neat, fountain-penned handwriting. My earliest  memory of this notebook was when I was about 8 years old. The only thing I knew how to make were pinwheel cookies from this very same newspaper- covered book. As I thumbed through the pages, I found many familiar foods that I had eaten over the years at home. My mother has always been a fabulous cook, and as we lived abroad, she recreated complex Indian dishes and desserts from scratch, forever popular in expat and diplomatic community in Manila.

So part of my New Year’s resolution in 2018 is to try all the recipes in my Mom’s 1952 BSc Home Science notebook I recently unearthed!  I started with the first one – cheese pakodas, or more like cheese puffs.  Unbelievably easy and yummy, they have just 7 ingredients, one being salt.  And the simple recipe also goes to show how uncomplicated life was 66 years ago!  It’s just salt – not rock salt, pink himalayan salt, kosher salt, Celtic sea salt, Fleur de Sel (I can’t even pronounce it!). Just simple salt.  And just simple cheese puffs. And just simply delicious. Want to make the cheese puffs below?  Here’s the recipe.

¼  teaspoon salt (or to taste)

Add water and make the batter. You want a batter of the same consistency as pancake batter.  Whisk with a wire whisk.

Allow batter to rest for at least for ½ hour after beating it well.

Heat  oil on medium heat in a small wok or deep frying pan. Put in a small crumb of mixture, if it comes to the top the oil is ready for frying.

Take the mixture on teaspoon, add into the oil and fry, turning often, until light brown and puffed (about ½ a minute).

Note: If cheese is salty, extra salt may not be required. Adjust seasonings in batter to taste. Also, make sure oil is hot, so puffs puff up quickly!

As I ventured on my cooking journey, I chanced upon Mom’s third recipe – Potato Taheri.  I, on my first look, thought this was some kind of potato curry.  It’s actually a turmeric flavoured aromatic rice dish to with spiced fried potatoes are added.  It’s not quite a pulao -on asking Mom I have understood that in a pulao, rice is added to spiced vegetables and they are cooked together, while in a taheri, cooked vegetables are added to spiced, cooked rice, so the veggies stay “khade” (as we say in Hindi) or crisp (since they don’t get boiled with the rice.)  Either way, it’s simple and delicious! While trying out the recipe, I noticed some ingredients were missing from the ingredient list, but had shown up in the method. When I asked Mom she said “The teacher used to speak really fast and we wrote whatever we could remember!” :). Nice to know that my lovely, perfect Mom was not completely infallible at 16! I also found out, that as she was too young for college, they had to fudge her birth-date and make her look a year older!  So she has her real birth  year, and the fake one too!  I’ve always wondered why her documents have two separate birth-dates!

While going through the recipes, I noticed a some unusual measure notations. “Chtk.” and “Dstsp.”  The second one was easy enough to guess – a dessertspoon, equal to two teaspoons. The first one – on questioning Mom after much unsuccessful research – is a chattank. So it turns out,  in the Indian system of measurements, 4 chattanks make a pao, and 4 paos make a ser. So there are 16 chattanksin a ser, and a ser is about . 0.93310 kg, and a chattank is about 62.5 grams. Phew! So much to learn!  Here’s Mom’s Poatato Taheri recipe.  Hope you enjoy it as much as I did.I will soon post more recipes from the now famed “Golden Cookbook,” as one of my intagram friends has named it!

Pick, wash and cover rice fully with water in a bowl for ½ hour.

In a medium size saucepan heat 2 tablespoons ghee on high heat and fry the onions until slightly browned, for about 2 minutes.

Add cloves, cinnamon, cumin, black peppercorns, bay leaves and green chilies to onions. Drain and add rice. Sauté until you smell the aroma of the rice, for about 1 minute. Add a cup of water to rice.

Add ½ teaspoon salt and turmeric and bring rice to boil. Lower heat to minimum and cook for 20 minutes.

Boil potatoes in a saucepan of water until cooked through for 10-12 minutes.Do not overcook. When you can stick a sharp knife in, potatoes are done. Peel and cut into long finger slices.

Remove hot rice to a serving dish. Add potatoes gently to rice and serve hot with raita or yogurt.

Serves:4. As part of a meal

Critical Ingredients: A taheri can be made with any vegetables.  Basically, the difference between a taheri and a pulao is that the vegetables are cooked separately from the rice.  So they are crisp and crunchy and not overcooked. You could technically use any vegetable or combination of vegetables.  Cauliflower can easily substitute for potatoes.  The spices all give nice flavor, but if you were to leave out one of the whole spices – cinnamon or bay leaves – you still would get a flavourful rice.  The turmeric however, is key to both the flavour and and colour of the dish. If you’re vegan, feel free to use oil instead of ghee.